Qana Youth Association participated in a march organized by the “Wa’i Initiative”, in cooperation with the “National Authority of the Litani River”.
The route extended over a distance of 13 km, from the Saghbine Bridge to the Qaraoun Dam.
Environmental activists from various Lebanese regions and the media participated in it, in addition to activists on social media, youth associations, educational institutions, and those affected by the pollution of the Litani River. With the aim of spreading awareness and supporting the lawsuit filed against the industrial factories polluting the river, and putting pressure on the polluters to address their conditions, and removing their pollutants from the riverbed and treating them.
It is worth noting that the expected second session will be held on December 18, followed by a third session on December 20.
LRA Litani River Authority 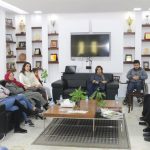