Qana Youth Association participated in the opening ceremony of the ground floor of the Qana Technical School building, as a gift from the Italian battalion of the UNIFIL forces.
The ceremony began with the Lebanese and Italian national anthems, followed by a heartfelt gratitude to the school principal, Mr. Farid Shaaban.
In turn, the Commander of the Western Sector of UNIFIL, General Bruno Pechota, stressed that the peacekeeping forces will continue to support the local community, which deserves all the attention and attention.
The Qana Youth Association had a brief speech, represented by Ms. Maryam Abdel Reda Taha, in which she presented the project of the Environment Committee, which is based on encouraging the use of cloth bags instead of plastic bags and encouraging shops and people to use them, and received a donation of 600 euros to support the project. 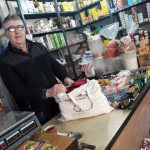 2000 Cloth Bags Distributed in Qana Town to Reduce The Use of Plastic Bags. 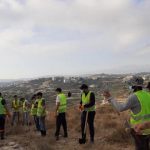