Today, Qana Youth Association concluded a youth capacity development program in cooperation with the Development Services Center in Jebel El Butm and with co-funding by UNIFIL and UNESCO, which was implemented from March 4 to April 23, 2019, and included 23 trainees from the surrounding areas (Qana – Siddikin – Jebal al-Butam – Aitit). North Tower).
The closing ceremony was attended by representatives from UNESCO and UNIFIL, in the presence of the mayors of Jebel El Buttm municipalities, two friends, members of the municipality of Qana and associations and activities in the region.
The celebration included speeches by the Director of the Center, Ms. Hanan Suleiman, the Commander of UNIFIL’s Sector West, Italian General Diodato Abaniara, and the representative of the Director of the UNESCO Office, Ms. Seiko Sugita.
The project of establishing a center for people with special needs in the town of Qana was presented by Qana Youth Association, and the proposed projects were presented to the rest of the parties in each town in front of the audience, and certificates were distributed to the trainees. 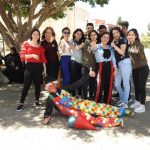 USJ “Abra”, in cooperation with Qana Youth Association and Joseph’s Youth, organize an entertainment day for children in the churchyard of the town of Qana 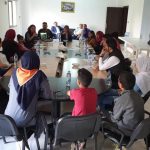