From Qana Al-Jalil to Tripoli Al-Fayhaa, the Qana Youth Association went to participate in the cultural activity organized by the MARCH Association as part of a youth cultural exchange with young people from Bab Al-Tabbaneh and Jabal Mohsen regions, along with other volunteers from Jabal Al-Sheikh and Baalbek in cooperation with the Union of Municipalities of Jabal Al-Sheikh and the Lebanese Association for Studies and Training.
The volunteers toured the city of Tripoli on a visit to the most prominent archaeological and historical sites, passing through the MARCH Cultural Café. The tour included a modest cleaning campaign on Syria Street, and then concluded with a friendly football match.
Everyone participated in strengthening the bonds between young people from different Lebanese regions as part of the cultural exchange and breaking down barriers as they exchanged stories and experiences and made unforgettable memories.
The Qana Youth Association thanks MARCH for this distinguished initiative, and thanks go to the Dutch Ambassador to Lebanon Jan Waltmanns, the Embassy of the Netherlands in Lebanon, and to the activist Imran Shonara from South Africa for his help in facilitating a constructive dialogue between youth, and to the Lebanese basketball star Fadi Al-Khatib for his participation in this Adventure 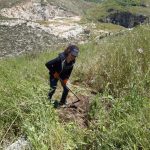 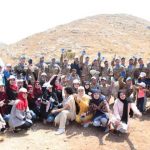 Awareness and Cleaning Campaign in The “RMEDIYEH” Cultivated Lands